Advertising itself as an “elite online club, where every member works the door,” BeautifulPeople.com sets the bar high for itself right off the bat. With a restricted registration system that only allows people to sign up once they’re voted in, BeautifulPeople really seems to make an effort to live up to its name. Unfortunately, after spending numerous months testing this dating service, we had no success with it. Between fake profiles and a user base that seems to conflict with the service’s name, in our opinion BeautifulPeople is a complete bust.

Reviews of BeautifulPeople.com are mixed – while some praise its high standards and voting system, others complain of fake profiles and a userbase that really doesn’t match up to the standards of the site. With the high bar that the dating service promotes and its reputation for creating a pool of attractive singles, we were a bit wary when we saw how mixed the reviews were for the service, especially with so many newer services offering such high quality. In retrospect, this should have been a sign of what was to come.

Despite the presence of real singles on BeautifulPeople, there is no profile verification system to weed out fake profiles. Expect to find yourself flipping through fake photo after fake photo and receive messages from scammers looking to squeeze your credit card information out of you. After our time using this dating website, we felt like we were using a glorified photo album more than an actual dating service that provides a means to connect with genuine people. BeautifulPeople.com is not a scam, but it’s definitely far from the most legit dating service out there, especially considering the price. 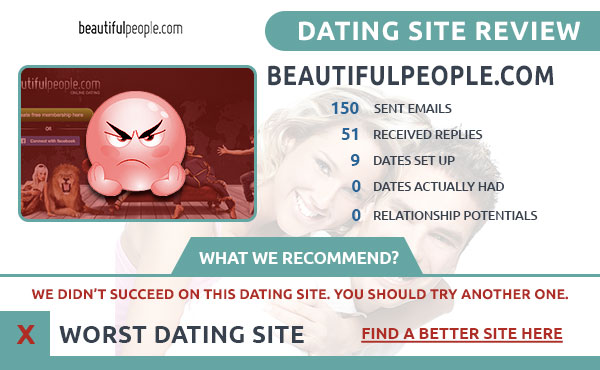 Comparison of BeautifulPeople. Category: Love. Conlusion: You should subscribe on other real dating sites.

Is Beautiful People Any Good?

After first signing up to BeautifulPeople.com, current members will vote on whether you are allowed to stay. Although this might seem like a great way to maintain user quality, instead it leads to a very narrow range of people on the website. Most of the users using this dating service fall into the same categories when it comes to style and looks and when you factor in the fake profiles, browsing this service begins to feel less and less like a real dating website. To make matters worse, those who are allowed to stay must pay for the service once voted in. From our experiences, this is not dating service worth the money for a premium membership at all and the chances of you getting laid with local women or finding a relationship are slim.

Over the course of a few months, we received 51 replies from users on BeautifulPeople. From these replies, just 9 people were willing to set up dates and of these 9 people, none of them led to actual dates. For a service that promotes itself as an “elite online club,” the results were a complete letdown, especially considering the fact that paying for a membership is a necessity. Even if a free option was available, BeautifulPeople still wouldn’t be worth the effort.

Fake profiles are a common occurrence on BeautifulPeople and the messages that you receive from these users are typically scams. If you’re already using this service to connect with local singles, be wary of people asking you for personal and credit card information and take note of profiles that have duplicate profile pictures. With the amount of scams and fakes on this website, it really makes you wonder how much effort the team behind it is putting into quality control. If you’re going to promote your dating service as elite, it’s really essential that you make sure that it lives up to the lofty expectations that come with such a tag.

Despite what the marketing and image will have you believe, BeautifulPeople.com is far from a legitimate dating service. Although its voting system could be very effective, the quality of the user base ruins its potential and at the end of the day the website is nothing more than a pool of fake profiles, scammers and people that are there to boost their ego more than make a serious connection with local singles. Do yourself a favor and pass on signing up to BeautifulPeople – it will cause you nothing but stress and disappointment.